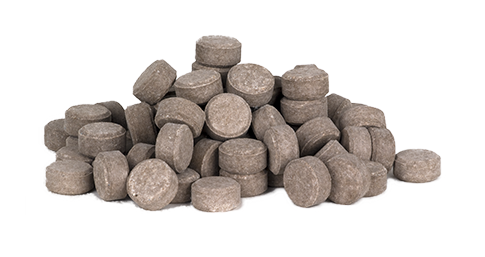 The objective of this experiment was to verify possibilities of application of increased doses of powdered fertilizers SILVAMIX®FORTE(SF) and SILVAMIX® (S) into growing substrates as well as their effects on growth of ornamental woody species grown in containers for two growing seasons. Besides, the effects of both fertilizers were tested  with regard to their application either into the substrate prior to or on the substrate surface after planting.

In  the experiment, bare-rooted plantings of Pinus silvestris L. (seedlings 1/1), height 10 - 15 cm  were used. Seedlings were planted on 17 May 1997 into 9 x 9 cm 500 ml containers, with a uniform bark-peat substrate (40 vol.% of peat, 40 vol.% of composted bark and 20 vol.% of clay with unit weight of 0.4 g/cm3; basic dose of fertilizers is presented in Tab. 1 as the control variant K).The experiment involved 4 variants with application of fertilizers into the substrate prior to planting, 4 variants with application of fertilizers on the substrate surface after planting and the control K (only with the basic dose of fertilizers (see Tab. 1). All variants had three replication with 28 plants each. The doses of fertilizers were based on the basic dose of SILVAMIX®FORTE fertilizer in the amount of 5 g/l of substrate; further a doubled dose was applied to increase the supply of nitrogen. The doses of SILVAMIX® fertilizer were applied in such a way that the total amount of supplied nitrogen was the same as in the case of SILVAMIX®FORTE.

Tab. 1  Layout of the experiment: P - application of fertilizers on the surface, SP - superphosphate 18% of P2O5

Prior to the application of  slow release  fertilizers, a complete chemical analysis of the substrate was carried out (Tab. 2, Var. K/1). For substrates containing fertilizers SF and S, values of pH and electric conductivity (EC) were estimated. To the end of this experiment (autumn 1997) chemical analyses were carried  out again in control and in all variants with the application of fertilizers into the substrate (Tab. 2). In all analyses the method described by Soukop et al.(1987) was used.

Experimental substrate contained high amounts of available nutrients (Tab. 2, Var. K/1). Doses of slow release fertilizers increased slightly the estimated values of pH and EC. However, the EC values (characterizing the degree of salinization of the substrate) were on an adequate level  even after the application of doubled doses.

To the end of the experiment, there were differences above all in contents of available phosphorus and potassium among individual variants.  Substrates containing fertilizers SF and S showed  higher levels of these nutrients, especially in the case of doubled doses. The highest content of phosphorus was observed in substrates with S fertilizer which has an increased content of this nutrient.

Tab. 2  Chemical properties of substrates before planting/1 and  to the end of the experiment/2 in control (K) and experimental variants with application of fertilizers SF and S into the substrate
pH and EC (electric conductivity) - aqueous eluate 1w : 5v, contents of available nutrients

In 1996, the growth of plants in individual variants was evaluated using a five-point scale (1 - the worst, 5 - the best). The annual increment was measured in 12 plants from each replication to the end of growing season. The annual increment, total height of plant and the diameter of stem above the root neck were measured to the end of the whole experiment in autumn of 1997. Results are presented in Tab. 3. The obtained results were statistically analysed using the method of variance analysis on the significance levels of 0.01 and 0.05.

In the following text these levels of significance will be presented in brackets.

Tab. 3  Evaluation of growth intensity of P. silvestris L. seedlings with regard to fertilization variants

In 1996, there were no marked differences in increments among individual variants of fertilization. The lowest increment was observed in the case of control receiving only the basic dose of fertilizers while all fertilized variants showed annual increments higher by 6 to 26% than the control (statistically non-significant).  More marked differences between fertilized variants and control were observed in the habitus of plants. The best quality of young plants was observed in variants B and D with doubled doses of SF and S fertilizers. These plants were more robust, with longer needles and good coloration. In control, the growth of plants was less intensive, needles were markedly shorter and there was a yellowing of needles to the end of the growing season, probably due to a lower uptake of nitrogen.

In 1997, the increments of fertilized variants were  markedly better than those of non-fertilized control. The most marked difference was observed between variants B, D on the one hand and control K on the other (0.01) and between B, D and AP (0.05). This means that best growth was observed after doubled doses of SF and  S fertilizers applied into the substrate prior to planting (variants B, D). Lower values were recorded after the application of fertilizers on the substrate surface (var. AP). As far as the total height of plants was concerned, also in this case the best values were recorded in variants B and D (0.01). Of fertilized variants, the smallest plants were observed in the variant AP as compared with B and D (0.05).

There were marked differences between fertilized variants and non-fertilized control in the diameter of the stem above the root neck of experimental seedlings. All fertilized variants showed significantly better values than control (0.01) and the best variant D was significantly better than variants BP (0.01) and A and AP (0.05). In variant D, a higher dose of phosphorus supplied to plants in a doubled dose of S fertilizer showed a positive effect on this parameter. As far as the quality and habitus of plants were concerned, the differences between individual variants were  not as marked as in 1996.

The growth of plants was further evaluated as an experiment with three factors on two levels (i.e. application of  fertilizers into the substrate and on the substrate surface, type of fertilizer - SF and S - and the dose of fertilizer related to nitrogen - basic and doubled). The results of control were not taken into account. Results  (Tab. 4) were statistically analyzed using the method of variance analysis of triple classification on the significance levels of 0.01 and 0.05.

Tab. 4 Evaluation of the growth of P. silvestris L. seedlings with regard to three factors